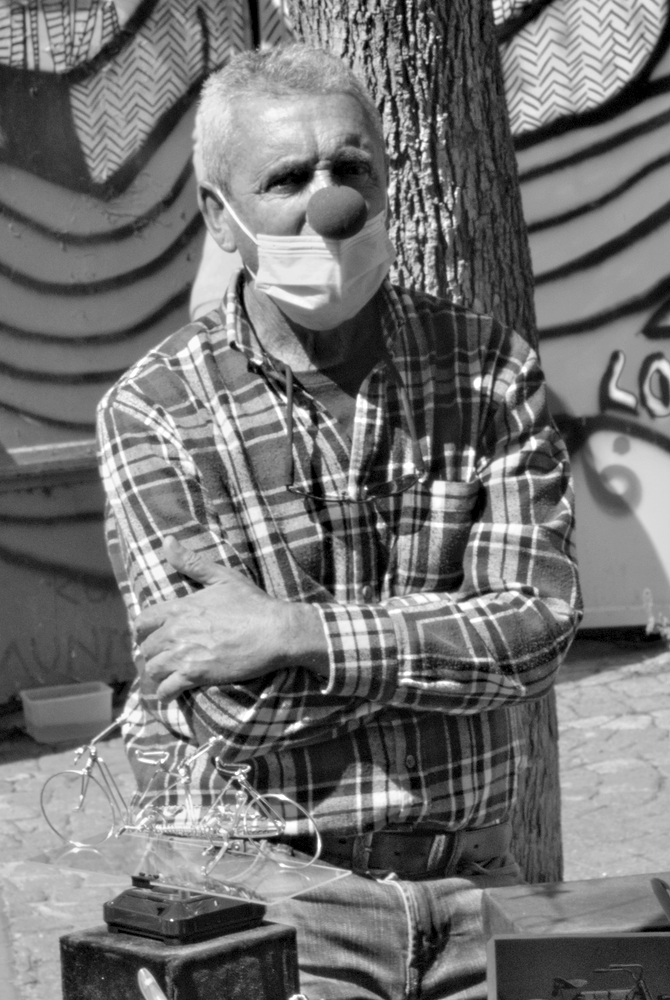 I never understood why some people are afraid of clowns. I know I don’t belong to the current generation, but when I was young, every child was happy to see a clown. The most famous duo were the “Auguste”, who was the clumsy one, and the “white clown”, who was also known as the “sad clown”.

But it was not real sadness, and everyone knew it, including the children. It was more some kind of melancholy, a character trait used to emphasis the contrast and the comedy of situations between him and the Auguste. The duo’s shows usually ended with a nice piece of music – the white clown usually playing a flute and the Auguste playing the accordion – which would make them both happy, and the public also.

But the sad clown in this photo has nothing to do with the white clown. His big red nose perhaps makes him an Auguste, but he is not smiling – because even though we can’t see his mouth because of the covid mask- I can bet that he is not hiding a smile. He doesn’t seem to be clumsy, he is just sad, and we can feel the depth of this sadness.

In reality this guy is not a clown. He is an artist, selling his work in the street in Tel-Aviv, during the celebration of Purim – the jewish carnival – which should be a moment of joy for all, as any carnival should be.

But can a clown be happy in the current circumstances? Have we reached the point where even a clown, a carnival, can spread real sadness? It seems so, and thus the following questions arise: do we truly understand what has been broken, and, is it in our power to repair it?

I am one of those who believe that we first have to repair ourselves, we, the people, the whole of humanity. I believe in old concepts as Ethics, Beauty, Generosity, Justice, Natural order, and I believe that we have lost ourselves somewhere on the Path, and the actual state of the world is only an honest reflection of the state of our human consciousness.

So, we want to repair the world and put a smile again on the clown’s face? Let’s begin by repairing ourselves. Let’s begin by a real, deep, serious and true internal introspection. Let’s decide to be “better”. Who? Each one of us. We can do this, individually. We don’t need to walk the streets, shouting for Justice. We need to become a living example of what we are asking for, and THIS is what I understand as “being a philosopher”. It is not about having nice ideas. It is about being able to apply them in our lives.